We are a member of: 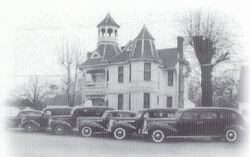 The year was 1927, Calvin Coolidge was President and Charles Lindbergh made his famous flight. It was the year that the monument at Mt. Rushmore was dedicated and “Babe” Ruth was baseball’s leading hitter.

It was also then, in the year 1927, that Murphy Jones founded the Jones Funeral Home of Hamburg and began helping Hamburg and Ashley County families through difficult times. At that time, it’s likely Mr. Jones had no idea to what extent this noble business he has started would be taken. Quite possible, he was simply satisfying an instinctive desire to provide support to his friends and neighbors when they needed it most.

In the 1930’s the Jones family purchased the Barnes home and moved the funeral home to its present location on East Lincoln Street. The funeral home has under gone several renovations down through the years and is the most up to date, modern and largest funeral home in the area. In 1976, the chapel was built next to the funeral home. It was designed by Mr. Ray Oneal, manager and long time employee of Jones Funeral Home with a seating capacity of over 200 people. It is one of the best designed funeral chapels in Arkansas and has been duplicated on several occasions.

While our firm is proud of its past, we are always looking for better ways to serve you in the future. Whether that means adding more special services or making renovations to our facility, we are dedicated to our profession and committed to helping the people in Hamburg and Ashley County who have come to mean so much to us.

Over the years, as more and more families have come to rely on us to help them through one of the most difficult times in life, we have found ourselves relying equally on the support of our community. We have always thought of this as a special partnership. Backed by over 90 years of dedicated, reliable service, you can count on us to be here for your generations to come.